…fire? No, just me practicing lighting my bee smoker for the first time!

Smoke is used by the beekeeper to mask the bee’s alarm pheromones (which are chemicals released and used for communication). When subjected to a disturbance (such as a newbie beekeeper trying to “invade” their hive), guard bees will release an alarm pheromone, which will basically rile up the entire hive into a defensive state.  Puffing cool smoke into the hive entrance and under the cover a few minutes before opening the hive will keep the bees chill.  Some people also say that this response to smoke is an evolutionary adaptive response to forest fires: smoke induces a feeding response, presumably because bees are stuffing themselves in case they have to abandon the hive due to the approaching “fire”; the bees are less able to sting when their abdomens are distended with honey.

I decided I had better practice lighting my smoker and more importantly, keeping it lit for at least 30 min. The last thing I want is to be mid-way through my hive inspections only to find my smoker has gone out just when I need it.  I’ve read that inexperienced beekeepers who notice their bees are lined up in little rows at the top of the frames, beady little eyes staring up at them, first think “Oh how cute!”, until they realize the hard way that they are NOT trying to be cute, they are feeling threatened and are about to teach this human a lesson.  With a lit smoker, all it takes is another gentle puff of smoke and they will return to what they were doing.

Beginner’s luck maybe, but I got the smoker lit no problem and it kept going for almost 40 min!  I used a combination of “smoker fuel” aka compressed cotton fiber for starter and then filled the rest of the canister with dried pine straw. Puff puff! 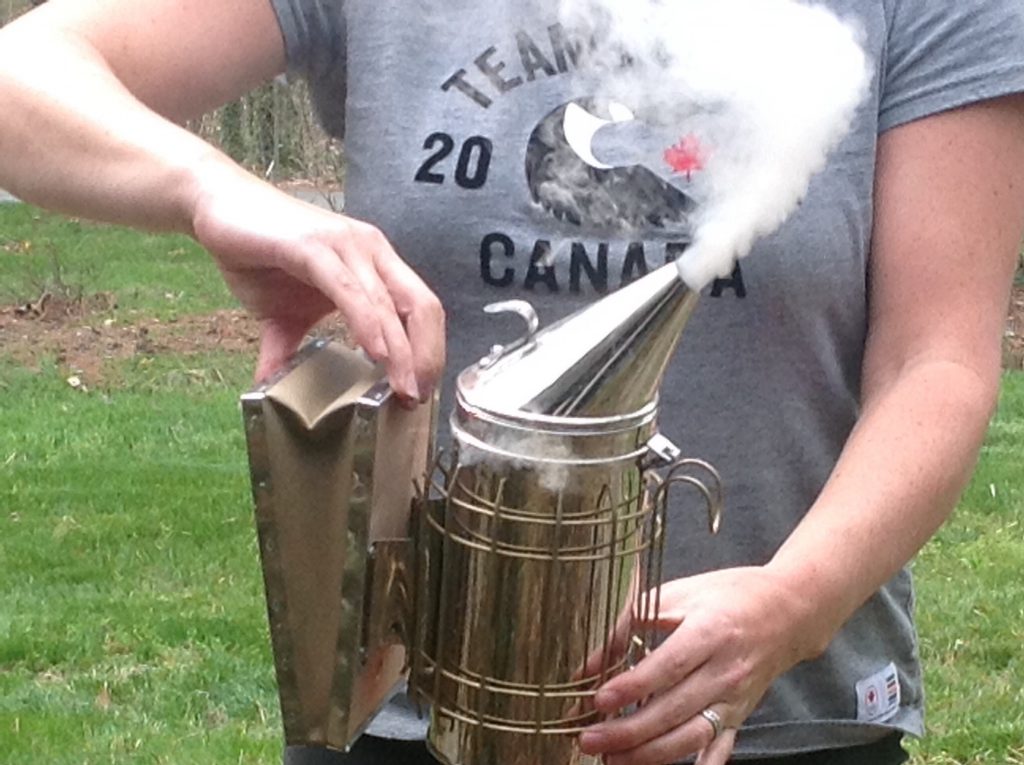