Well, we’ve made a new and interesting/mildly worrying observation in our hives recently. That is, the presence of so-called “queen cups” in both hives. These are enlarged, rounded cells that the workers have constructed on the face of a frame: 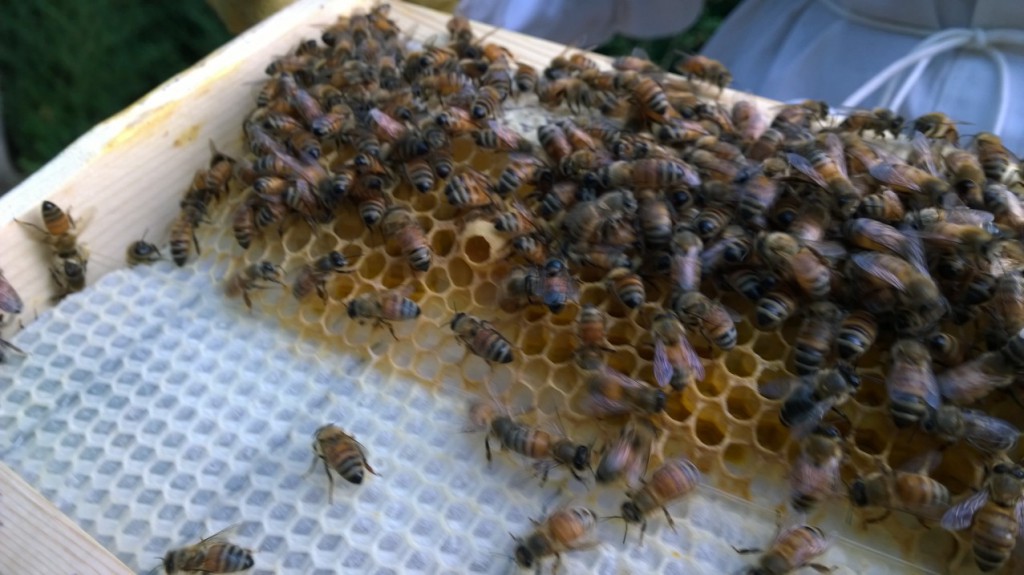 A “queen cup” on one of the frames of Elsa’s hive.

Thankfully, they are empty (i.e. no egg or larva in them). Based on 1. the position of the cup on the frame (it’s in the middle, and not hanging off the bottom), 2. the fact that there are only a couple (vs. up to 10-20), 3. that the cups are empty, and 4. the hives still have a laying queen (we saw eggs in the regular cells), I feel reasonably sure that we aren’t looking at swarm cells or emergency queen cells. I’m hoping they aren’t supercedure cells either, where the worker bees feel the need to replace a failing queen. 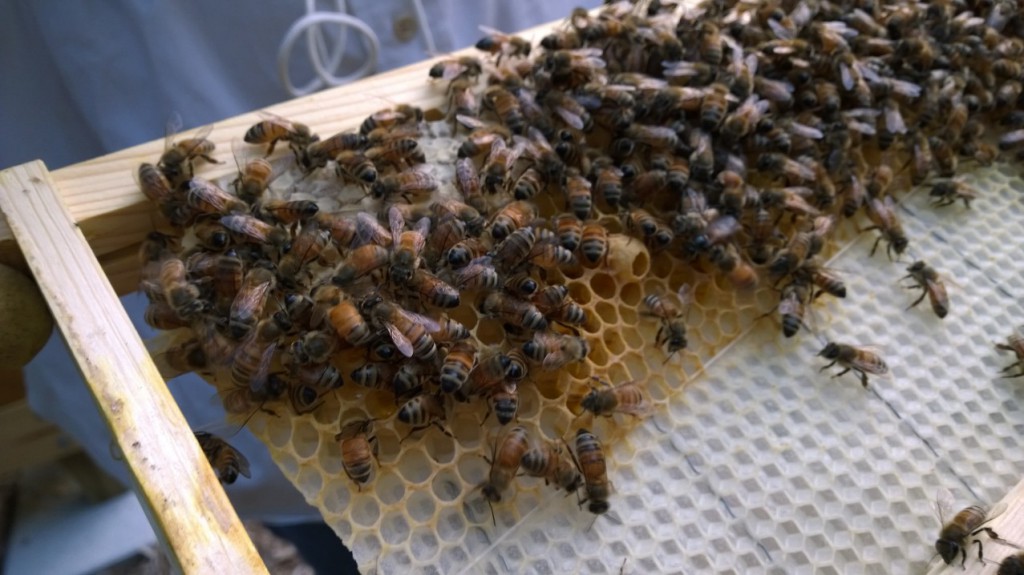 Another angle on the queen cup.

There are different reasons that bees decide to build these structures:

1. Swarm cells: If the hive is overcrowded, a swarm is the natural means of generating new honey bee colonies. The workers build many of these cup-like structures, and once an egg is laid in them, they build out the wax into a long peanut-like shape wherein a new queen will develop and eventually hatch. In the meantime, about 3/4 of the hive’s bees, including the queen, will abandon the hive and find a new place to live. Not a good thing from the beekeepers perspective! In about 3 weeks, the new queen(s) will hatch from their swarm cell, and if there are more than one, they will fight to the death until only one queen remains to take over what’s left of the original hive.

2. Emergency cells: These are built when the reigning queen has abruptly died. This could be from something like the beekeeper crushing her during an inspection, or dropping her onto the ground during frame manipulation. The workers will quickly sense that they are queenless and they will build an enlarged cup around a very young larva in a regular cell, and will begin feeding it copious amounts of royal jelly to induce it to become a queen.

3. Supersedure cells: These begin as a queen cup that the bees construct if they decide to raise a new queen. It could be that their existing queen is getting old, injured, or for whatever reasons, not laying enough eggs to maintain a healthy colony population.

The queen cups we’re seeing could be the precursor to either #1 or #3 above. On the other hand, some beekeepers say that bees sometimes build queen cups just for the heck of it, sometimes for “practice” and sometimes for fun apparently.