Today (May 4th), just as I was thinking about leaving work and heading to the gym I get this frantic text from Rob (and my panicked reply):

Apparently, he had just happened to look out the back window and noticed a dark mass hanging off a branch about 30-40 feet up in a tree in the back yard. 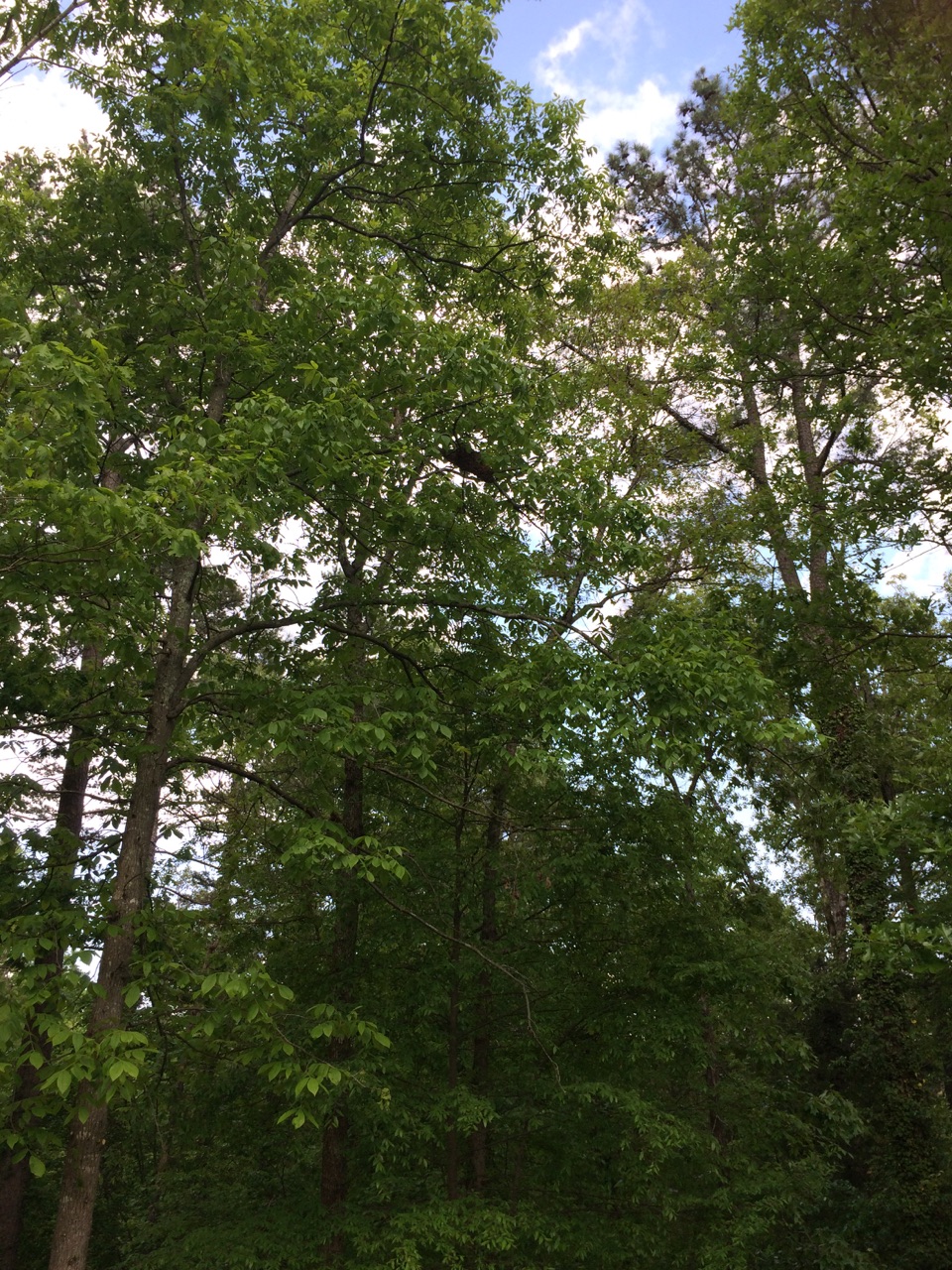 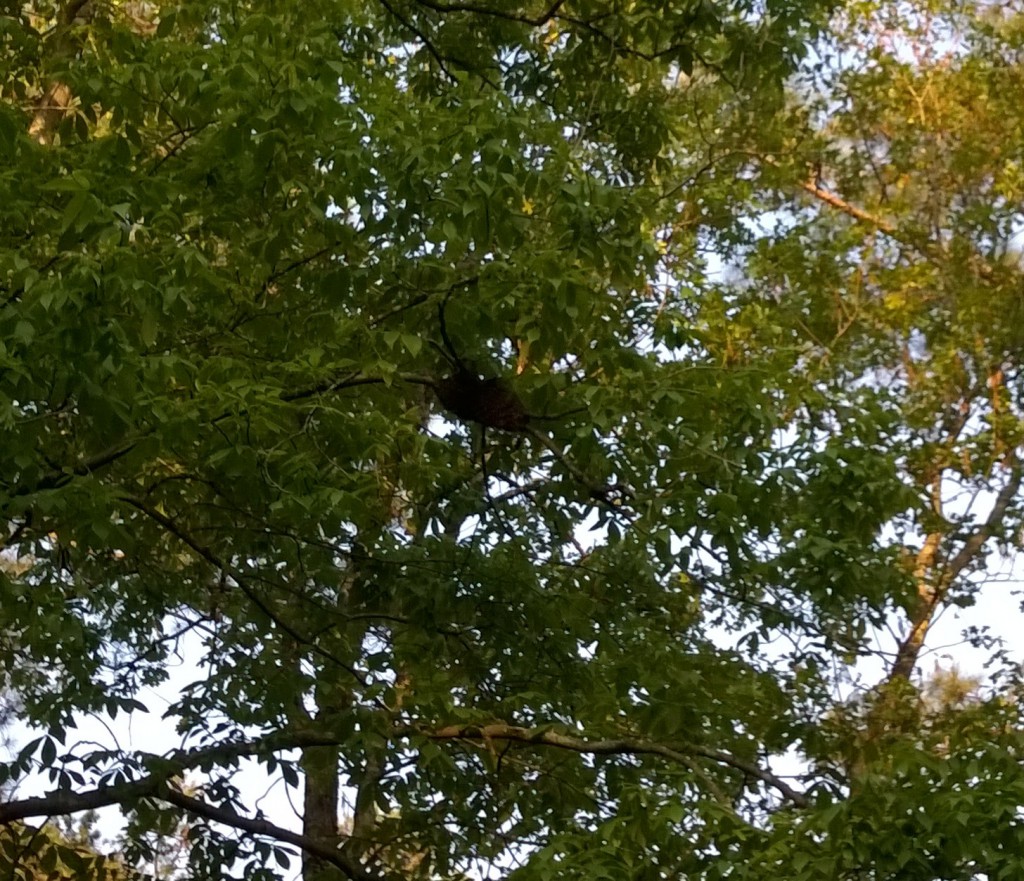 Another, closer view of the swarm. The queen will be in the very center of that bee cluster.

So I raced home, sure that it was one of our hives that had swarmed! When we had done our inspection on the weekend, hive 2 was boiling with bees, however, their 4th box (which we had added about 3 weeks prior) seemed to still have room for more egg laying. A quick peek inside Hive 1, which has it’s own problems (more on that in another post), showed a similar amount of bees as on the weekend. And both hives appeared to still have normal activity (lots of foragers coming and going, some orientation flights occuring at the hive entrances). It was beginning to appear possible that this swarm was one passing through, from some other location!?!?

If we could capture this swarm, we would either: a. be reclaiming our own bees “back”, or b. getting free bees!  We quickly decided (well, actually, I vetoed the idea), that attempting to climb a ladder 30 feet in the air to cut off the branch that held the suspended swarm would not be a good idea (sorry Rob!).

The other option was to try and entice the girls to leave the branch using a bait hive or swarm trap. Basically, we set out a hive box with frames of foundation (unfortunately we do not have any extra frames of already drawn comb available), about 4 feet off the ground under the tree with the swarm. I took a cotton ball and put several drops of lemongrass essential oil on it, and put it in the box. This scent apparently mimics a pheromone that signals “come here, this is home!”. Our hope is that the scout bees will encounter our bait hive, decide that it looks like a cozy new home, and convince their sisters to move in. 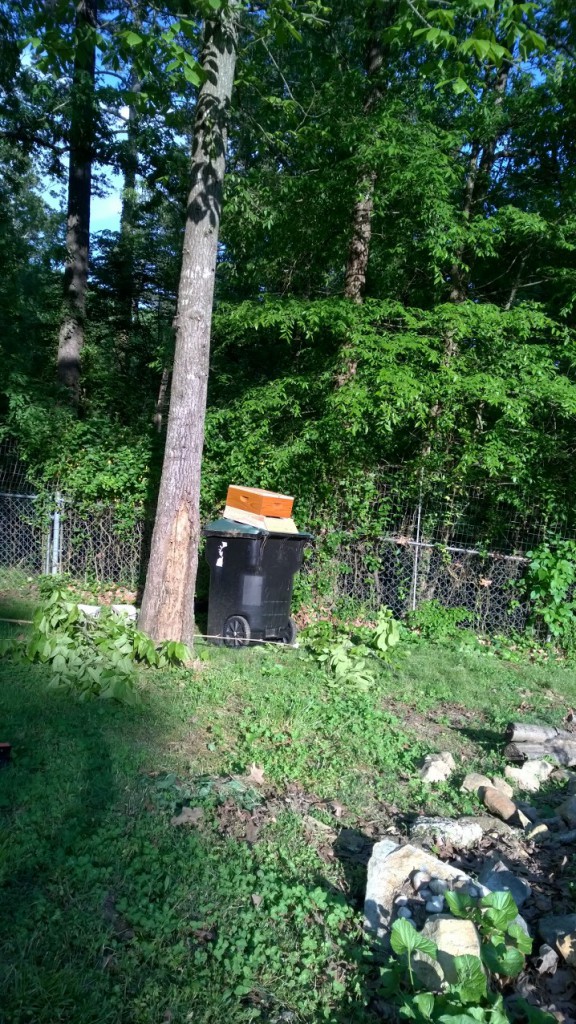 “I like the house, Marge, but the place below it is a bit of a dump”

Update: As of 8 pm, the swarm looks like it will settle in for the night up high in the tree. There were a couple of scout bees buzzing around our bait hive, hopefully they will check it more tomorrow!

Will let you all know if they’re still there in the morning!

UPDATE: For part 2 of this swarm saga, see this post.