In case you missed it, 2 days ago we discovered a swarm clustered about 40 feet up a tree in our backyard. The next afternoon it was still there, and only a few scout bees were checking out our bait hive.  The branch they were on was too high to safely reach with even our longest ladder. I had seen just enough crazy YouTube videos to think there might still be a way!

Let’s just say there are some creative folks out there: some methods included shotgun blasting the limb to the ground, using a swarm retrieval bucket attached to a long pole, or finding someone with a cherry picker that can reach high enough.  None of these options were feasible in our case, so we went with the less glamorous but effective rope over branch/shake approach.

I tied some fishing line to a wrench, gave it a mighty heave-ho and voila! after 3 tries managed to get the line up and over the branch holding the swarm. We then fed a long extension cord we had (the closest thing we had to a long enough rope) over the branch, and Rob got ready to give the branch a vigorous yank. 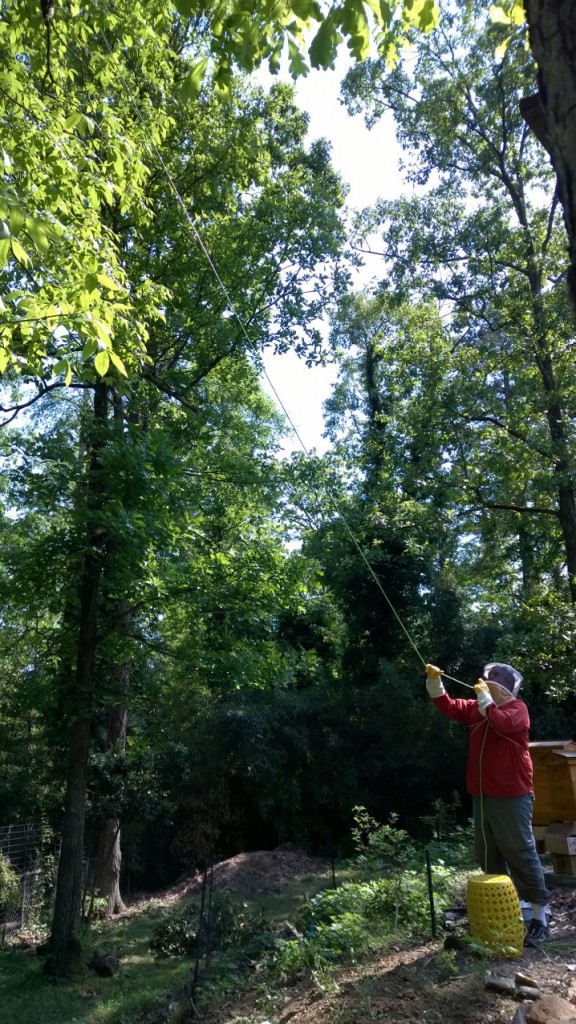 It rained bees, most of which landed on the tarp we had laid out on the ground. However, they promptly flew back up to the branch, indicating that the queen was still up there.  We tried this several times, and each time they returned to the branch. 🙁

After about 30 min of trying (and after it took us over an hour to get the rope over the branch in the first place), we decided to let nature take its course, and wished the ladies luck with the house-hunting.  The bait hive is still in place, hopefully they take a closer look at it.  Anyway, we feel like we did all we could and now just have to let the bees decide.

UPDATE: As of this morning they were still hanging out on the branch, making it almost 2 days that they have hung there, undecided…